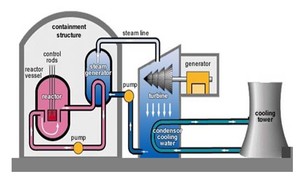 Many believe that nuclear energy is so complicated that normal people can’t understand it. While that may be the case with understanding how to split an individual atom and maintain a controlled chain reaction with radioactive products, how a nuclear power plant works as a whole is fairly simple. It’s basically a giant steam engine. The only part that is “nuclear” is the core reactor, or heat source of the steam engine.

However, even though it is simple, safety at nuclear power plants must be kept at top priority because of the potential dangers that can result from this “steam engine” overheating. If cool water isn’t constantly circulated around the heat source, then the nuclear reaction will begin to melt the container that is holding it. If that happens, then there could be large explosions and deadly radioactive material will almost certainly be released into the atmosphere requiring widespread evacuations and causing long term damage. For example, Arkansas Nuclear One has a mandatory evacuation zone of 10 miles if a meltdown were to occur, as shown by this map, and a larger 50 mile circle is suggested by most experts. 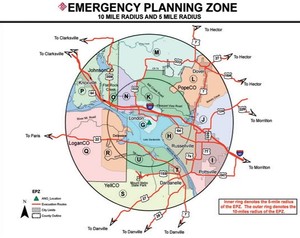 At Bailey & Oliver Law Firm, we work every day to ensure that everyone who works at corporate facilities, including nuclear facilities, has safe working conditions and is not put in harm’s way. Whether you have been injured in an industrial incident or would just like to know more about nuclear power plants and how they can operate safely, give us a call at 479.202.5200 and someone would love to talk with you.  (479) 202-5200