This article was reprinted from the Arkansas Democrat-Gazette.  Story by Mike Jones, January 16, 2019. 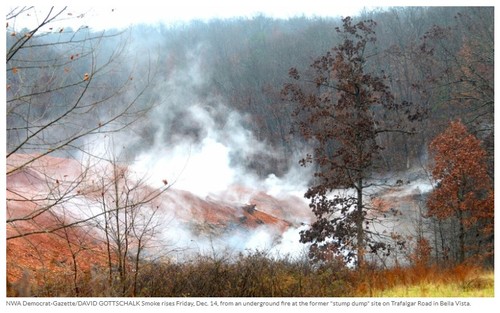 BELLA VISTA -- The Arkansas Department of Environmental Quality will do continuous air monitoring in the city because of smoke from an underground fire on Trafalgar Road, according to a news release.

Air monitors will be set up Thursday at Bella Vista Fire Station No. 2 at 8300 Trafalgar Road and Cooper Elementary School at 2 Blowing Springs Road.

The Arkansas Department of Environmental Quality has launched a Bella Vista community information page on its website: https://www.adeq.state.ar.us/bella-vista/. The page contains up-to-date information regarding the fire. The department also has set up a designated Bella Vista community phone line at (501) 682-0906 and an email address at trafalgarsite@adeq.state.ar.us.

Monitors will record particulate matter levels on a 24-hour cycle. The department will collect and analyze the data and release findings to the public, according to the release.

Particulate matter monitoring measures the amount of solid and liquid droplets found in the air such as ash, dust and smoke. The amount provides a snapshot of local air quality and how it might affect health, according to a news release from the Arkansas Department of Health.

Preliminary results of monitoring near the fire showed air quality in the "unhealthy" category, according to a news release issued Dec. 12 from the Health Department. Everyone within a half-mile radius of the 8000 block of Trafalgar Road was cautioned to avoid prolonged or heavy exertion outdoors.

The federal Environmental Protection Agency performed air monitoring at the former stump dump site on Oct. 2 and 3, Nov. 9 and 10, and Dec. 10-13, Davis said in an email Tuesday. The EPA collected 24-hour air samples from five locations around the site, she said.

No air quality testing has been done since Dec. 13, Davis said.

Debbie Jones, superintendent of the Bentonville School District, said plans were in the works to get an air monitor at the school before Environmental Quality selected the Cooper site.

The air monitor is a precaution, Jones said. "We've had parents ask about it," she said.

The Environmental Quality department authorized the installation of a water line to the stump dump site last week. Davis said in an email last week the line was requested by EnSafe. The state hired the company that is based in Memphis, Tenn., to put out the underground fire, which has burned since late July.

Putting in the 8-inch water line was a first step to establish a water source for smoke and fire suppression for when an action plan is developed and implemented, according to the department.

"We are just waiting for the experts to come back with a plan," Bella Vista Mayor Peter Christie said Tuesday.

Gov. Asa Hutchinson pledged money Dec. 28 to start the process to suffocate the fire. The $990,000 will come from a state fund that has $8 million and is used to help clean hazardous and problematic sites, he said.

Tom Judson, the Bella Vista Property Owners Association's chief operating officer, said the association operated the dump on leased land from December 2003 until the end of 2016 when the dump was covered with soil.

Nobody monitored the site the last few years it was open, but staff members would remove trash when possible, Judson said. The stump dump operation was closed Dec. 31, 2016, according to Bella Vista's website. The property is owned by Brown's Tree Care.

Firefighters were initially dispatched to the area July 29, where they spotted smoke and what appeared to be the remains of a brush fire, Fire Chief Steve Sims previously said.

Fire Department personnel have said the fire may be burning more than 50 or 60 feet underground.