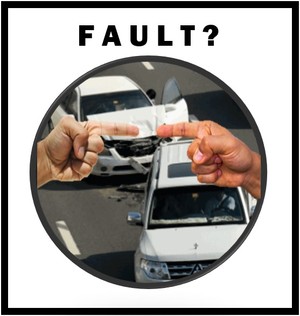 A common question both plaintiffs and defendants have when litigating a personal injury claim is what happens when both parties share in the blame for the accident. Does this prevent me from recovery? Does it matter how much at fault I was versus how much at fault the other person was? Many personal injury cases run into this situation, otherwise known as comparative or contributory negligence.

Car accidents are a common personal injury case and as such, serve as a useful hypothetical to clarify the type of situation we are discussing. Imagine you are driving and you end up at a four-way stop. Another driver is opposite you and arrives a few moments after. You go to turn left but you forgot to put your blinker on and the other driver speeds forward and hits you as you are turning. Now, let us imagine that the other driver was texting and driving as they approached, stopped, and proceeded to collide with your car. This is the type of situation comparative fault is supposed to handle. Both drivers in this hypothetical are at-fault for the accident; however, the driver who was texting throughout the entire incident would appear to be more at fault as they were disregarding their responsibilities of operating a vehicle.

Arkansas law is interesting in how it deals with these types of situations. We have what is known as “modified comparative fault”. For those interested in the text of the law, it can be found at 2010 Arkansas Code, Comparative Fault.   Arkansas uses what has become known as the 50% rule. That is to say, that a judge or jury will prescribe fault to the parties involved and so long as the plaintiff is less at fault than the defendant, the plaintiff is allowed to recover. So, in our example if a

judge decides that not putting the blinker on put you 30% at fault you could still recover because the other driver is more at fault than you. It is important to note though that your recovery will be subtracted according to the proportion of fault attributable to you in the accident.

As you probably imagine, cases with comparative fault can become complicated quickly. If you have a case that sounds similar to this kind of situation, or you are simply seeking legal advice feel free to contact the law office of Bailey & Oliver.

At Bailey & Oliver Law Firm we have years of experience litigating complex cases and representing clients who have suffered from personal injuries. With our representation, you can rest assured that we will go the extra mile to provide you the legal help you deserve. Our office is located West of I-49 at Exit 81, just off Pleasant Grove Road in Rogers, Arkansas.  Give us a call at 479-202-5200.