I.     Introduction     We live in a visual world. People gather information, make decisions, and plan their lives based on what they see. From entertainment to work to religion, people are reading less and watching more. This isn’t just a generational issue either. Whether it’s on Facebook, Twitter, Instagram, Snapchat, or some other network, 78% of Americans have some sort of social media profile.[1] That means 78% of America is used to rapidly updating snippits of information that include pictures, videos, gifs, hyperlinks, interactive quizzes or polls, and all other sorts of attention grabbers. Like it or not, that is how a majority of Americans, and a majority of jurors, process information. Our job is to present our client’s story to the jury as the jury is, not as we wish they were. That is why short, simple, colorful, and abundant visual aids are a MUST in any modern jury trial.

II.   Visual Persuasion     “Visual learners” is a term that most people are familiar with. Some people retain information better if they see it in picture form than if they hear it or read it. However, we’re not teachers, we’re persuaders. Not only does the jury have to understand the information that we’re putting in front of them, they have to agree with our interpretation of that information. That’s what turns “visual learning” into “visual persuasion.”

The concept of visual persuasion was laid out best in a story told by Dr. Frank Luntz in his book Words That Work. “In 1984, Lesley Stahl of the CBS Evening News put together a lengthy report she thought was critical of President Reagan. In Stahl’s own words, ‘I was worried that my sources at the White House would be angry enough to freeze me out.’ But after the story aired, Deputy White House Chief of Staff Michael Deaver was anything but angry. ‘Way to go, Kiddo,’ he said to Stahl. ‘What a great piece. We loved it.’ Stahl replied, ‘Didn’t you hear what I said?’ Deaver replied, ‘Nobody heard what you said… You guys in televisionland haven’t figured it out yet, have you? When the pictures are powerful and emotional, they override if not completely drown out the sound. I mean it, Lesley. Nobody heard you.’ The happy pictures of President Reagan – looking strong and amiable and, well, presidential – undermined the context for Stahl’s harsh critique.”[2]

The principle that was true for the CBS Evening News in 1984 is even more true today; people are influenced by what they see more than what they hear. Even though this may be magnified by our picture-heavy society, this idea is not new. Aristotle developed the first theory about how people think in pictures.[3] Aristotle talked about these inner pictures or “phantasma” and how they influenced and defined our thinking about everything from our own self-image to complex mathematics. Fast forward to 1589 and we have the first recording of the Oxford English Dictionary using “mental image” as a synonym or example of the word “idea.” Id. For a long time, we have instinctively known that we think in pictures.

Since we think in pictures, the most effective way of influencing action is through the use of pictures. In fact, the foundation of late twentieth century supply-side economics comes from one man drawing one simple picture on a napkin.[4] If we are able to communicate our argument to the jury in picture or visual format, we will have a much greater probability of spurring them to action.

In fact, one of the most powerful uses of visual aids is to show your case to the jury without them having to hear what you say at all. A 2015 study found that the average attention span for an adult is just over 8 seconds.[5] That is actually shorter than the attention span for a goldfish. What they mean by “attention span” is the amount of time a person will focus on a single thing without being distracted by outside stimuli. So, if you start talking, you have about 8 seconds of the jury’s undivided attention. After that, they’re fighting with their own brains to stay focused on you. Putting a visual aid, or better yet, multiple visual aids in front of them while you’re talking gives them something to bounce off of and still digest what you are trying to say.

III.  Short AND Simple     If we know that humans think in pictures, and we know that we must try to argue using pictures, the next question is what pictures do we use? The answer is simple; we use simple pictures. Simple images, easily understood visual aids, and lots of them are the best way to convey our argument to the jury.

We have to take a very complicated issue (our client’s case) and break it down into simple, bite-size pieces that we can show to the jury. Each of these pieces needs to have at least one visual aid that goes with it. These visual aids can be anything from a literal photograph to a hand-sketched picture that we make on a flip pad to high-tech computer generated anatomically correct injury diagrams. There are two main requirements; they have to be bite-size (short), and they have to be digestible (simple).

When discussing pictures or visual-aids, I like the term “bite-size” instead of just “short” because we’re talking about all of the information contained on that visual aid. A visual aid can have no words at all and still contain too much information for the jury to process. If you put up a flow-chart diagram with fifteen different stops along the way, that’s not bite-size.

Also, a visual aid must be easily understood. Even if there is the proper amount of information on the visual aid, if the jury can’t understand it, we haven’t done our job. You can have a bite-size visual aid that has an indistinguishable image or complex word on it, and it will not advance your case at all. That is why I distinguish between short (bite-size) and simple (digestible).

In my opinion, the most difficult part of being a trial lawyer is finding the balance between answering all of the jury’s questions and keeping focused on only the essential issues. That line can only be found using visual aids. Visual aids and pictures allow us to give information to the jury without focusing on it. We show them a picture of the scene of the wreck, and it answers any random questions they may have about the layout of the road without us having to take the time to actually talk about details that don’t matter.  The only way that we can simplify to the point that is necessary to be effective is to use visual aids.

IV.  Conclusion     Visual aids are a necessary part of trial. Going before a jury with a case that does not offer visual stimulation or explanation is equivalent to taking the case before a firing squad. People think using pictures and are influenced by pictures far more than they are by words. We must use pictures and visual aids to simplify our case and make it possible for the jury to understand. The only thing left, is to get creative with how we will use visual aids with our next case. This presentation will show examples of creatively simple visual aids that work and walk through how to develop visual aids for any trial. 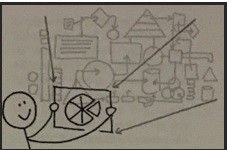