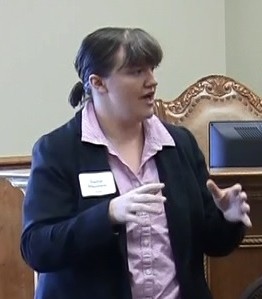 On February 20th 2016, I participated in the Bailey and Oliver Speech Contest. This contest was a critical tool in allowing young people to voice their thoughts, opinions, and ideas. This year’s topic was over the importance of the 7th amendment in the United States which I wasn’t very informed about due to the fact that I was born in Scotland, yet with a variety of different research skills I established a stance on the given topic.

I have been on the Bentonville High School Forensics and Debate team these past four years and from this, I have established strong speaking skills that allow me to voice my opinions in a clear and concise manner. In November of 2015, I had a debate topic that was based on the principles of jury nullification in the United States, and I used this vast amount of research as one of the main components within my speech.

The speech contest overall allowed me to meet new people from around Northwest Arkansas, and grow a deeper understanding for the United States Criminal Justice System. I am really thankful to Sach Oliver, Frank Bailey, and Kim Daniels at Bailey and Oliver Law Firm for the opportunity to present my opinion to the community. I am also grateful to my teammates and my coach Mrs. Callie Ham for their unconditional support and guidance throughout my high school speech and debate experience.

Below is a copy of the speech that I presented:

The United States is known as being a “melting pot” nation with a wide range of different races, religions, genders, ethnicities, and nationalities. These all come together to make our great nations, but it wasn’t always this way. Empirically the United States has had a Criminal Justice System that focuses on a single person’s, usually a white male, opinion to society problems. As the United States modernizes and grows into a more open culture, diversity has thrived, especially through the process of the jury system. The jury system allows twelve people with a wide range of different backgrounds to help grow the community. The concept of the 7th amendment, right to trial by jury, is key for the ideals of freedom to grow. Freedom defined by Oxford English Dictionary is “the power or right to speak, act, or think, without hindrance of restraint.” Allowing individuals to have a voice in their community grows people’s freedoms and understanding for society. By firstly analyzing the emeries behind the right of trial by jury, then the positive implications that come from juries, and finally examining the nature juries have in the United States, we will be able to see that the 7th amendment is critical to the United States.

The United States didn’t just suddenly establish a jury system, it all came about due to one pretty amazing country… Britain (I’m British) Now the concept of the jury all was established with King Ethelred in the 9th century. King Ethelred was also known as being “King Ethelred the Unready” and this was amplified with that lack of much of a criminal justice system. Due to his lack of preparation, he accidently created the first jury of twelve noblemen in order to resolve disputes. We now progress to the 12th century, King Henry II now is ruling Britain, and throughout his legacy, he redefined and grew the legal system throughout the land. His acts of clearly establishing a jury system to resolve problems of land disputes etc. transferred to the United States. Through the ideas of colonialism and imperialism, the ideas that King Ethelred and King Henry II established came to the United States and allowed freedoms to thrive. The concept of the trial by jury thrived with the 15th, 19th, and 21st amendments and overall allowed the ideas of democracy to magnify within the United States.

We have now examined the history of how the jury ideas came to Britain, but what exactly is the benefit of them? There are two main benefits that come from having a jury system. The first one is the ability to prevent unjust governments from seizing power. Juries allow more than just one person to make the decision for the community at large. There are a variety of bias that a single individual can have such as racism, sexism, homophobia, etc. but with twelve individuals it is better than allowing a government official to put their own personal agenda above the needs of the public. The second benefit to allowing the right to trial by jury, is ideal of jury nullification. Jury nullification is defined by Law Professor Doug Linder as “when a jury returns a verdict of "Not Guilty" despite its belief that the defendant is guilty of the violation charged.  The jury in effect nullifies a law that it believes is either immoral or wrongly applied to the defendant whose fate they are charged with deciding.” We have empirically seen the importance of jury nullification with the Jim Crow Laws being nullified by juries due to the fact they were considered oppressive and immoral. A more modern example of jury nullification is with transgender oppression. Right now the LGBT community is being struck with immoral laws and regulations by governmental actors. Jury nullification nullifies these laws to the unjust nature behind them. The right to trial by jury allows individuals to protect themselves from unjust and immoral acts by the government.

The jury system has empirically been in the United States and has helped thwart of negative components of society such as racism and overall oppression Other countries have begun to model the United States in order to have the same opportunities and freedoms. The right to trial by jury has a variety of different benefits for the United States but overall the most important component is encompassing the diversity and freedom that makes the United States the great nation and “melting pot” that we cherish today.