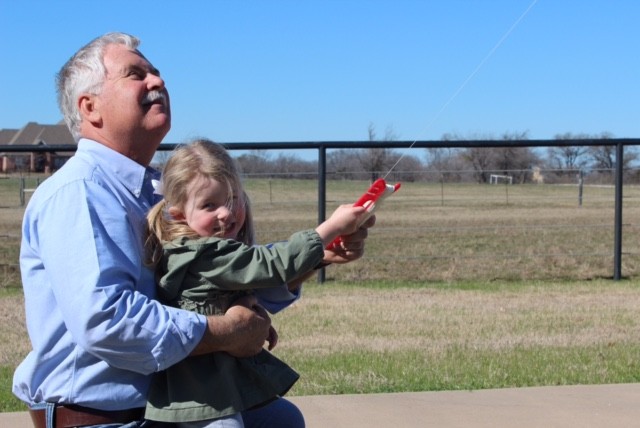 Mark Dobbs was a renaissance man.

Whatever he did, he became fully committed to it, which includes a 28-year stint in the Navy; writing two books; building his own home; fishing; and, as a Rotarian.

“My dad was really talented in a lot of ways,” said Mark’s daughter, Kristi Christensen.

Mark lost his life on June 16, 2013 – Father’s Day. He and his wife, Cheryl, were travelling on Highway 62 to their home in Bull Shoals when their car was hit by an 18-wheeler. Cheryl was critically injured with broken bones and brain trauma.

“My husband, Lennard, and I picked up my sister on the other side of Fort Worth and made the eight hour drive to Springfield, Missouri where my mother was in critical condition,” Kristi said. “I don’t think we said a word on the entire trip – we just prayed that mom would survive.”

Cheryl did survive. Her recovery has been long and excruciating. Six weeks in critical care, six weeks in brain trauma care and six weeks in rehab.

“It has been a long hard, road for my mom but she is resilient and strong,” Kristi says proudly.

Cheryl didn’t return to her home in Bull Shoals; the empty house was just too much to deal with.

“While dad was still in the Navy in 1985, he and mom found a home on a beautiful hill overlooking Bull Shoals Lake,” Kristi recalls. “After he retired, that house became their primary residence and they rebuilt it from the ground up like they did everything else – together.”

If Mark were still alive today, he and Cheryl would be on the verge of celebrating their 42nd wedding anniversary in January. Theirs was a marriage that, by all accounts, was perfect.

Mark and Cheryl met when they were kids when their respective families owned neighboring farms at Walnut Ridge. Their love story began there and blossomed.

“My parents presented my sister and I with a great model of what a marriage should be,” Kristi says. “I never saw them fight or argue. I’m sure they had disagreements but they did so in private – never let us see it or hear it. They were so much in love and it showed. They held hands, hugged and kissed on one another and just simply loved each other. They were supportive of each other and of us kids.”

Kristi says it saddens her that her own children – Kieren and Cord – will grow up without their grandfather in their lives. But rejoices in the fact that her mother is now living nearby in Fort Worth.

“Physically, mom is doing fine and her broken bones are healed,” she said. “But the brain trauma continues to be a problem as mom struggles with fatigue, strength, balance, motivation and initiative.”

Once the Chief Financial Officer of a small produce company, Cheryl, who is 59 years old, can no longer take on such functions. Life for her has changed in so many ways.

“My mom lived everyday to impress my dad. She was so much in love with him that she wanted to make sure she looked beautiful for him at all times. Today, it’s difficult for her,” Kristi said.

The difficulties, however, have been made easier to deal with thanks to successful outcome of a lawsuit the family filed against the company to which the 18-wheeler belonged.

“After the accident, we were concerned about one thing – my mother’s survival and well-being,” Kristi recalls. “I didn’t want to think about legal action at that time and was, frankly, scared to go down that road.”

Kristi’s husband, Lennard, says it was Mark’s involvement in Rotary “that pointed us to Frank Bailey.”

Based on her negative perception of attorneys, Kristi said she was skeptical about getting involved in a legal proceeding. But there was something different this time.

“This is often overused, but the people at Bailey and Oliver are like members of our family. We never once felt like a client; we felt like a member of the family. Our problems became their problems. They took the time to get to know us, to understand our needs and fight our battles,” Kristi said. “We genuinely love them for what they’ve done for my family in lifting the financial burdens often associated with these kinds of tragic events.”

Nothing – not time, not a lawsuit – will bring Mark Dobbs back, restore complete healing to Cheryl, or erase the tragic loss suffered by family and friends. What remains, however, are vivid and lasting memories of a man who left an imprint on the world and people around him – a legacy of love, loyalty, commitment and family.